I Have Cigarettes Again!

All I can say is thank goodness for my Adsense! I got my Adsense payment a few days ago and I am now happy to report that I have cigarettes again!

I also found out that my regular "haunt" where I do go buy my cigarettes is going to continue to sell the cheaper little cigar brand called "Smokin Joes".

When I went to buy my cigarettes I noticed that the store was still selling the "Smokin Joes" but there was a note attached saying that they had gone up in price. So now they cost about $3 a pack but they still seem to be the cheapest cigarette alternative - unless you count buying individual cigars - they cost about $1 each.

I didn't buy any of them this time because I had had my mind set on buying regular cigarettes because quite frankly I was getting tired of those little cigars. But it's good to know that they are there "in case of emergencies.

So I'm happy and grateful and I am in a good mood!

Labels: I Have Cigarettes Again

That's right! I am OUT of cigarettes again!

I still have about 2 1/2 weeks before getting my Adsense money - and boy is that a long way off!

I'm trying to remain upbeat and positive about this but those withdrawl symptoms are a bummer!

On a related note it seems that the cigarettes - really they are actually called little cigars - that I used to get for a more cheaper price of about $3 a pack won't be available anymore. The name of the brand was called "Smokin Joes" and the owner of the store where I got them from told me that the cigarette vendor had raised the price so he decided not to get them anymore.

So although its going to be more expensive now I prefer cigarettes over those "little cigars" anyway! So far it seems like the cheapest pack of cigarettes (I mean real cigarettes!) that I can find is a brand called "Maverick". "Kools" are still my favorite brand and "Kools" are my brand of choice though.

Someone wanted to know if I have ever tried an E-Cig - short for electronic cigarette - before? Well first this is the first time that I have ever heard that term so I decided to take a look at their website just to see what it was all about.

My problem with them is that the are advertised as an "alternative" to regular cigarettes and I don't want an alternative because I want the real thing! So it really doesn't look like anything that I would be interested in.

In terms of "E Cigarettes" I would much rather have the real thing!

Labels: Comments From Others

It's Getting Harder And Harder To Find A Cheaper Pack Of Cigarettes!

Well I went to my regular cigarette haunt today and came to find out that they would no longer selling the "Hummer" brand of cigarette! 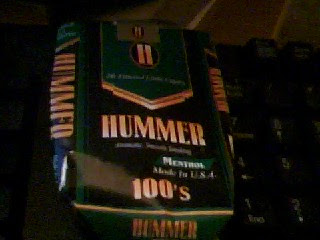 It seems that the manufacturer raised the price of the cigarettes and they are now no longer the cheapest brand of cigarette that I will be able to buy!

And this isn't the first time that this has happened either! There was a brand of cigarette that I could get for about $1.50 cents but the same thing happened when they raised the price to over $3.50!

I never did really like those little cigars but they were cheaper in price than the regular pack of cigarettes!

So now it looks as though I'm just going to have to stick to the cheapest brand of cigarettes - not little cigars - that I can find! It will be a lot more expensive but like I said before I really hated those little cigars!